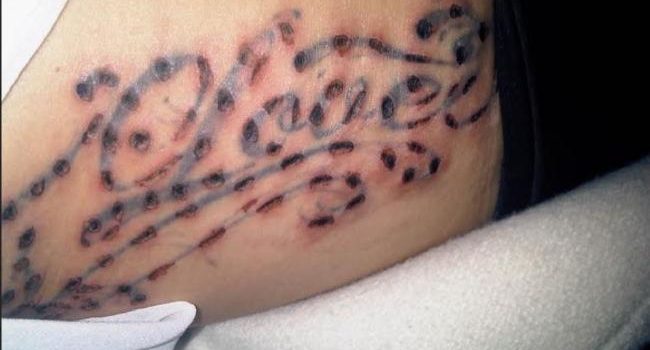 JESSICA* was 19 years old when she got two black paw prints tattooed on her breasts. Now, at age 25, she has changed her mind and wants them removed.

Earlier this year she visited a popular national laser clinic chain and was told that after 10 treatments, priced at $125 each, the removal would be an “easy fix”.

After six treatments, she wasn’t happy with her progress and was told to book her remaining treatments at a nearby clinic within the same chain, as they had a “higher strength laser”.

She took her business to a competitor, Think Again Laser Clinic in Sydney’s inner west, for her remaining four treatments, but the two paws couldn’t be removed. The damage had already been done.

“The tattoo has faded, but it looks awful,” said Jessica. “Most people go in there with a nice black tattoo. It fades and fades evenly, whereas I have patches of skin and tattoo.

“I have this half visible, half lumpy, raised tattoo thing on my breast, which is the most vulnerable part of your body. I don’t wear a bikini or any top to show cleavage.

One in seven Australians has a tattoo, according to a 2012 study from the National Health and Medical Research Council. More than a third of Australians regret getting inked and one in seven of this group are considering removal.

There is growing concern about the largely unregulated laser tattoo removal industry in Australia, with plastic surgeons and laser technicians issuing warnings about “dodgy” clinics using cheap machines. These machines are often operated by poorly skilled technicians, who can leave patients with permanent disfiguration and thousands of dollars in cosmetic surgery bills.

“Any surgery to get rid of a tattoo will definitely leave you with scars and the scars are not necessarily better than those caused by dodgy laser removal,” Dr Kumar told news.com.au.

“They are still going to be disfigured compared to what they would be in the first place.” Dr Kumar says getting a tattoo removed via laser by a qualified technician is always the ideal outcome.

Most of his clients come from the Think Again Laser Clinic, who refer patients to Dr Kumar when there is nothing they can do.

“The public are so used to hearing about lasers — laser hair removal is so common now — that they’re under a false impression that they’re always safe. A good laser in bad hands is so dangerous.”

Most people require 6-15 laser sessions, depending on the size and style of tattoo. Mr Anderson charges $270 per session for a ‘tramp stamp’, which is usually 15cm by 10cm. A sleeve can cost between $1000 and $1500 per session. The word is spreading that laser removal clinics are a profitable businesses.

“I see a new clinic popping up in Sydney every week and they’re not all equipped with the right technology,” said Mr Anderson.

“These people are still charging the same price and they’re getting away with it. They’re making good money and it’s at the expense of people’s skin, permanently. They’ve jumped on the bandwagon because you can make a lot of money by doing this.”

Laser tattoo removal works by generating heat that destroys the pigment in the tattoo. There are two types of laser machines: Q-switched machines, which are the industry standard and cost around $150,000, and intense pulse light (IPL) lasers which cost between $10,000 and $15,000. IPL laser machines are often marketed as all purpose machines, but are not suitable for removing tattoos.

If not applied correctly, the heat from the laser can damage the skin, causing a burn that can lead to more significant scarring that the original tattoo, says Australian Society of Plastic Surgeons spokesman Dr Jeremy Hunt.

“The only solution is then to surgically remove it. It can involve a skin graft and this can lead to significant scarring,” Mr Hunt told news.com.au.

Dr Kumar says he has had to perform several unpleasant procedures on patients with botched laser tattoo removals.

“I saw a lady recently who had a tattoo on her upper arm. She had attempted to have it removed three times [using a dodgy laser] and what she had been left with was lumps of tissue and a scar. I had to bring her into the theatre and I cut out the entire tattoo. The skin was all cut out and stitched back together,” he said.

“But a larger tattoo may require a local flap surgery or a skin graft — which is where you borrow tissue from another area.

“Another lady I saw had a substance injected under the skin to try and remove the tattoo, but it ended up leaving ulcers on the skin.”

Regulation of the laser treatment industry varies around the country — only Queensland, Tasmania and Western Australia have some rules in place. In NSW and Victoria anyone can buy a cheap laser machine online, do a weekend crash course and call themselves an “accredited” laser technician.

“Laser procedures, including those used for tattoo removal, are not regulated under the Public Health Act 2010 and Public Health Regulation 2012, because they do not carry the risk of transmission of a disease from client to client,” a NSW Health spokeswoman told news.com.au.

However, the NSW health department is currently reviewing the regulation of cosmetic surgery and private health facilities.

News.com.au understands it will wait until the results of The Medical Board of Australia’s review into the largely unregulated billion dollar cosmetic surgery industry is released in January 2016.

This lack of regulation means an increasing number of patients with botched laser tattoo removals are forced to have their tattoo removed surgically, as a last resort.

The procedure can cost several thousand dollars and most of these costs are not covered by Medicare or private health funds.

Jessica has now had her two paw tattoos surgically removed by Dr Kumar. The ink couldn’t be removed in one sitting, so will undergo another surgery in six weeks time.